1. Which forests are locally known as ’Hental Van’?

2. The predominant species of mangrove forests is……

3. What is the local name of the hills with flat tops in Eastern Van Ghats region of Odisha?

4. Which districts of Odisha face destruction of forests due to practice of podu cultivation?

5. Which tree covers almost 33% of the forest cover in Odisha?

6. Odisha is the third largest produce of ……

7. Which among the following region is an orchid rich forest found in Odisha?

8. Which of the following is the medicinal plant which is found in Odisha?

ANSWER= (D) All of these

9. The Odisha Forest Development Corporation Ltd. came into existence in which year?

10. Which among the following is not a forest division of the Odisha state Forest Department?

11. How many National Parks are there in Odisha?

12. Bhitarkanika National Park is located in which district of Odisha?

14. Simlipal National Park is located in which district of Odisha?

15. Which wildlife sanctuary of Odisha has a unique feature of being a tiger reserve, biosphere reserve and national park? 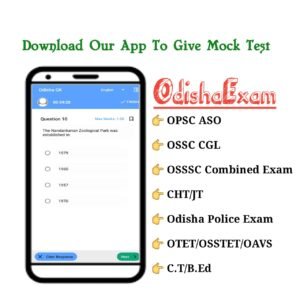